The Globe and Mail Canada 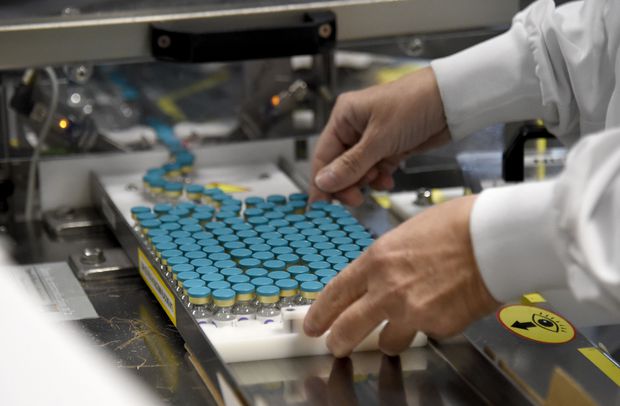 Approval of Medicago's new COVID-19 vaccine is dependent on results from a Phase 3 clinical trial, which are not expected until the summer or later.

Canada’s first homegrown COVID-19 vaccine to be tested in human subjects has notched an impressive result that suggests it may perform well in relation to other vaccines when deployed against the pandemic. A key question remains how soon that might be.

Results from a Phase 2 clinical trial show that the two-dose shot developed by the Quebec-based biopharmaceutical company Medicago can do as well or better than the mRNA vaccines produced by Moderna and Pfizer-BioNTech – and significantly better than those made by AstraZeneca and Johnson & Johnson – at generating antibodies against the coronavirus.

The interim results, which Medicago researchers posted in a study on Tuesday, have not yet been reviewed by other scientists.

They include data gathered up to April 9 on 600 individuals who enrolled in the Phase 2 trial. By design, half of the participants were over 65.

The scale of a Phase 2 trial is insufficient to provide a direct measure of the vaccine’s efficacy. However, the concentration of antibodies that the Medicago vaccine generated in those who received it is higher than that demonstrated by any vaccine that Canada has made agreements to purchase, apart from the shot made by Novavax, which has not yet been authorized by Health Canada.

“It’s not going to be a perfect comparison, vaccine to vaccine, but based on those numbers you’re going have good efficacy,” said Craig Laferrière, head of vaccine development for Novateur Ventures, a Vancouver-based company that advises clients on vaccines and other health sciences products.

The trial found that the vaccine generates 10 times the antibodies seen in the blood of individuals who have already been infected with COVID-19, which suggests it could work as a one-dose vaccine in that population, the Medicago team said.

Nathalie Landry, executive vice-president for scientific and medical affairs at Medicago, said that after two doses, the vaccine was seen to perform equally well across age groups.

“We achieved the same level of immune response in the elderly as in adults [18 to 65]. So that’s an interesting result as well,” Dr. Landry said.

Approval of the vaccine hinges on results from a Phase 3 clinical trial, which are not expected until this summer at the earliest, Dr. Landry said. The trial is being conducted in 11 countries and aims to enroll up to 30,000 individuals. That should offer the first definitive look at efficacy, providing that at least 160 positive cases of COVID-19 emerge in the study group to discern the difference between those who received the vaccine and those who got a placebo instead.

The timeline illustrates the dilemma for Medicago and other companies that are following behind the front-runners in the COVID-19 vaccine race. While their vaccines may eventually prove to be as good or even better than those currently in use, it is difficult to provide the data that can verify this when prospective volunteers for a clinical trial know that they can get another vaccine instead of risking the chance that they may get a placebo as part of a study.

So far, Canada is the only customer for the Medicago vaccine and has agreed to purchase up to 76 million doses. The vaccine is not among those in a mix-and-match clinical trial under way in Britain. Such a trial could reveal whether the Medicago shot would be suitable as a second dose for someone who received the AstraZeneca vaccine as a first dose. Since that trial is only looking at vaccines that are available in Britain, Medicago was not included, Dr. Landry said.

She added that the company is still in discussions to see whether a mix-and-match study can be organized. It may have better luck creating a booster shot if it turns out that people need to be inoculated against variants of the coronavirus in another year or two.

On that score, the Phase 3 clinical trial data should be particularly useful because the trial will test the vaccine in Brazil and other countries where variants of concern now dominate infections.

Several COVID-19 vaccines are in development in Canada and a handful are now in clinical trials. Among those next in line behind Medicago is a vaccine developed at the VIDO-InterVac infectious disease laboratory affiliated with the University of Saskatchewan.

Volker Gerdts, who heads the lab, said a Phase 1 study of the vaccine is progressing well. Results have not yet been released but a Phase 2 study is planned, he said.

The Medicago vaccine became the first Canadian-made vaccine to reach clinical trials last summer, just 2½ months after Pfizer’s shot. However, at each stage Medicago has taken longer than its mRNA vaccine competitors to advance, in part because it is a protein-based vaccine that is produced in tobacco plants. The production process takes longer but the benefit is that it offers a high yield and, potentially, a less expensive vaccine that can be more easily shipped and stored.

Ali Ardakani, Novateur’s managing director, who co-authored a performance analysis of several COVID-19 vaccines in March, said that because of this, Medicago’s vaccine could become a bigger player on the global stage than at home.

“In Canada, it may catch the tail end of the vaccination effort. But generally speaking, it’s going to be a really good vaccine for the rest of the world, future revaccinations and pandemics,” he said.